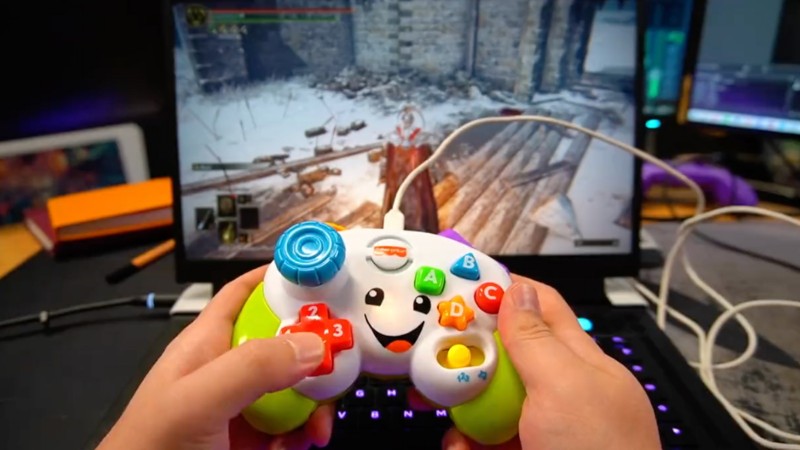 If you have children, or friends or family with children, there’s a good chance you’ve seen Fisher-Price’s “Laugh & Learn Game & Learn Controller.”

Between memes, jokes, and more, the controller has gained a touch of infamy online, and now, one Elden Ring player has modded it to be playable on PC, as reported by The Verge. Going even further, they’ve played Elden Ring using it. Controller modder Rudeism (on Twitter) posted a clip yesterday of him using this modded controller to play Elden Ring and while that alone is impressive, what makes it better is that the Fisher-Price controller still lights up and makes all the sounds it usually does.

and thanks to @Wario64 for the off-hand joke that inspired me to make this happen 😂 pic.twitter.com/3OETvcsEsI

As you can see in the video above, it’s quite a hilarious mod. As for how fun actually playing Elden Ring with this controller is, well, only Rudeism knows but something tells us it’s going to be a little harder to take down Radahn this way. Imagine dying to Radahn, while he has just a sliver of health left, only to hear a Fisher-Price song begin playing, almost as if to taunt you in your death.

For more, read Game Informer’s Elden Ring review and then read about the latest Elden Ring patch, which fixes an infamous Malenia bug. Check out this Elden Ring player who used mods to enter the game’s closed colosseum, where they discovered a Site of Grace and two enemies inside.

Do you think you could beat Elden Ring with this Fisher-Price controller? Let us know in the comments below!